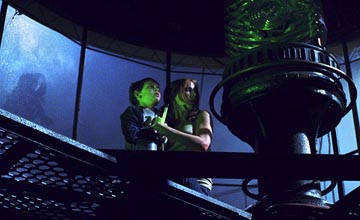 OK, so I’m talking to someone who has just come from watching “Darkness Falls” in the theater. “It is SO scary, you’ve got to see it!” Well that’s all it took for me, I wanted to see it ever since, but never caught it while it was playing. I didn’t know much about it other than there was a Movie Maniac made before the movie even came out. The same person praised “The Ring,” so I figure this should be good.

Well I finally watched it on DVD and it turns out to be a fairly typical supernatural killer lurking in the shadows kinda thing. The “Toothfairy” (a female Freddy Kruger under a Phantom of the opera mask who flies around like the (much more menacing) evil ghost in “The Frighteners”) preys on kids losing their final tooth in the town of Darkness Falls. Now, I don’t have particularly high standards when it comes to the genre as I usually find something enjoyable about anything even loosely considered horror/scary whatever, but I was definitely let down. Of course, I don’t usually go into modern flicks with high expectations the way I did with this one and that might have ruined it. Low expectations have paid off for me lately (The Ring, Final Destination 2).

Questions: Does the tooth fairy attack every kid who loses their last tooth, or just random boys? What is the criteria? Or the tooth fairy comes to everyone and it’s just the kids who happen to see her? TF seems to try and kill the kid and everyone else around him (at one point, wiping out most of the police force) so why the heck does no one but the hero and currently menaced kid believe in her? Wouldn’t the whole town be wiped out by now? Or is it just one kid every 12 years?

As you can see, either I’m missing a lot, or there are holes all over the place (and OK already, the Sixth Sense was an overachiever. Have you noticed the new genre standard? The token spooky little “I see things” kid. I know this goes back way before The Sixth Sense (The Shining, Poltergeist), but now it seems like every freaking suspense film has the pale-faced, wide-eyed kid that sees ghosts). It wouldn’t have even mattered so much if I hadn’t watched a bit of the “making-of” extra on the disc. Who the hell ARE these guys??? (paraphrasing, not quoting) “We didn’t want to make a typical slasher film” (what’s so wrong with a slasher film? The tooth fairy is no Michael Myers), “we wanted to make something more intelligent like “Jaws” or “Alien,” something kids will watch at slumber parties for years to come.” Are they talking about the same movie I just watched? Horror can be, but does not have to be art. That is certainly a luxury of the genre in my opinion. Trash can be very enjoyable in its own right. To say that was stupid. These young guys talking like they are some kind of film scholars (while knocking the genre that they are trying to cash in on) and have just created a masterpiece for the ages. I hate that. Horror is not a “guilty pleasure.” If you’re going to make a horror film, embrace it and do it! Quit trying to make it ok to like your film by presenting it as a “smart thriller” or whatever, especially when it’s so dumb.