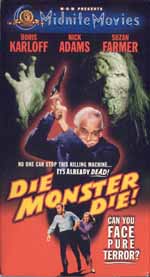 Based on a story by H.P. Lovecraft, Karloff stars as the wheelchaired master of a strange old house in Arkham, England who acquires mysterious powers when he is zapped by a radioactive meteorite. Color, 79 min, 1965. 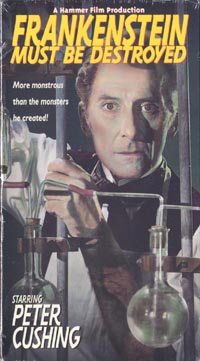 Frankenstein Must be Destroyed $4.99 (buy) 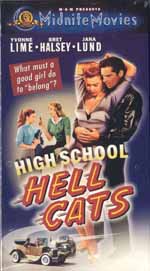 In this follow up to REFORM SCHOOL GIRLS director Edward Bernds once again mines the territory of naughty, nasty teenage girls. A gang of wicked co-eds vow to make their public high school a private hell for all the geeks, squares and faculty in attendance. Switch blades, drag races and plenty of harrowing peer-pressure fueled hi-jinks make this juvenile film a camp classic. 1958 1 hr, 9 min.

This original Hammer Studio rendition of the Dracula legend features Christopher Lee's first-ever appearance in the title role. His portrayal of the bloodsucking count is perhaps the best. 1958 82 min.

(all transactions include a free goblin trick or treat!)