Shaun of the Dead

Shaun of the Dead 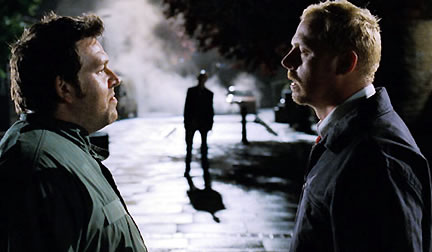 Very excited about this one after seeing the previews. You can usually count on the English for a real wacky time, so when I found out that there was a sneak preview, I bought tickets online to secure my spot. Turns out there was a promotion where you could get a free stocking cap if you showed up dressed like a zombie, so there were some zombies in attendance.

As the day before the show went on, I started to dwell on the possibilities. Maybe this is one of those movies that gives away all the funny parts in the preview. Is this thing even going to be scary or just goofy? Well, within 10 minutes of rolling, this thing had won me over. The preview is funny, right? Well the movie is freaking hilarious. The writing to me was the most amazing part. Top notch comedic stuff from such a young pair. No clichés, genuine characters, believable scenarios (up to a point). They employed the comedian technique (what’s it called, a “callback” or something?) where a joke would be set up early on and then punch lines would zing you later. It seemed real deft next to your typical safe American movie humor.

As far as the horror aspects go, this was no cheapy. There are some startling moments and the gore effects are incredible. To me the humor far outweighed the horror, but hey, who doesn’t like a laugh? There were definitely uncomfortable parts with much of the humor being dark, and one part in particular even made me squirm a bit.

The acting was also exceptional, especially by the two leads. This one is really recommended. It was exactly what a night out seeing a movie should be, a real ride. I left wanting to run around with a cricket bat.