Back to HALLOWEEN 2006 Main Page 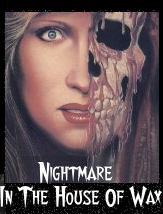 GH: Is there anything in particular that you’re super excited about at this years’ haunt? Something you think your customers will really enjoy and/or be scared of?

PM: The one thing that I'm most excited about this season is the set detail. You can't help but get drawn in. It’s easy to believe it’s all real. I'm still hard at work even now adding even more detail to the show just days away from our opening. I think the addition of several new sets and figures will keep even our most dedicated patrons on their toes.

GH: Any closing words for readers?

PM: In closing a few words from Magnus the wax sculptor.
“There's a chill in the air as the sky draws dark. the sweet smell of fear is stirring. My friends its almost time , there's no turning back now. One by One you will all see, but alas it will be to late. I'm waiting, watching ever ready. This Halloween there is no escape. I will exploit your fears and taste your tears. Enter My House Of Wax at your own risk for I Magnus am looking to expand my museum’s collection.”

Wow! If that doesn’t make you anxious to see this haunt, I don’t know what will.

GOBLINHAUS: How did you become interested in getting into the haunted house business?

PATRICK MATTHEWS: I first fell in love with the idea of haunted attractions as a kid when haunts were almost unheard of. One summer when I was 9 we went to Disneyland and a few surrounding attractions/ Wax museums. I knew then I was hooked I had the haunted bug. I was a mainstream haunt customer for several yrs until I was 22 when I seriously started acting in a few local shows.

GH: In your opinion, what makes a haunted house great?

PM: I feel a perfect mix of sight, sound and talent make a good haunt. Just like in any good movie a haunt must be visually stimulating as well as having a realistic audible environment to showcase talented actors. Far too many haunts focus on the size of the show and not so much in creating a realistic haunt environment. The gem in the crown of any good haunt hands down is good, dedicated actors. You simply must have convincing inhabitants to wander your halls and creep out the customers.

GH: How does the 2006 Nightmare in the House of Wax haunt compare to your first haunt? How have you changed over the years?

PM: That’s easy I know what I'm doing now. After years of haunt experience I look back and realize man what was I doing back then? We ( the show and myself ) have both over come tremendous obstacles and gained a wealth of talent and experience over the last 11 years. Our customers in the early years were fortunately never critical they really enjoyed the show and stuck with us. It’s a never ending challenge to push the limits and try new stuff each year. I know I'll look back 5 years from now and think man what was up with 2006?

GH: On your website you say that the House of Wax is the “goriest, most disturbing haunted attraction.” Is this how you try to set yourself apart from other haunted houses?

PM: I have found over the last 6 yrs a lot of haunts have tried to be very family oriented and non offensive. We don’t strive to be controversial or offensive just terrifying and entertaining. We have had hundreds of our customers complain each season about the competition being too sterile and less visceral. I decided to try and give the haunt customer what they have been asking (no begging) for. Something a bit more disturbing than the typical haunt. We have always been a bit on the edge but this year I decided to take a leap of faith and go with my gut feelings (excuse the pun). I will be honest, there are a few scenes in the current show that have given me the total creeps and I'm the one responsible for it. I just want to give the haunt fans what they want, I'm not out to emotionally scar anyone (that’s next year). Not to fear, there is something in the house of wax for everyone of all ages (Oh yes there will be blood).

GH: Why did you choose this approach? Do you think that gore is the most effective scare tactic?

PM: We have always used very elegant and detailed sets to tell our story and even though we had many complements on our sets and attention to detail everyone always talked about the chainsaws and gore. I simply decide to play up on our strengths and give the people what they want (more gore). We noticed the Texas market is a hard crowd to please. We’re pretty darn tough to begin with so Texans need a harder haunt to cut their teeth on. Gore is not the staple of the show its more of a tool however there are a few scenes that are so real you'll swear you heard them drip. Shock is the real approach to a terrifying scare. Regardless of the scenes content without shock value you have no scare.

ENTER NOW to WIN FREE TICKETS to the entire Phantasms Screampark which includes Nightmare in the House of Wax, Haunted Mead Manor and the Haunted Egyptian Temple of Anubis. Thanks Patrick!